2290 has its foundations as 101 High School Cadet Corps and is the oldest army cadet corps in Vancouver, BC. We have a proud history, serving the Vancouver community for more than 100 years. We are a proud member of the extended British Columbia Regiment family.

We parade each Thursday night between 6:30 and 9:00 pm at the BCR Drill Hall located at 620 Beatty St. downtown Vancouver.

On October 1st 1962 2381 RCACC was formed. The unit paraded near what is now the Jericho lands for the Canadian Forces. When the unit was formed it was affiliated with the 8th Royal Canadian Electrical Mechanical Engineers. 9 years later, in 1976 the Cadet Corps changed affiliation, again. This time 2381 became part of the Vancouver Militia Service Battalion Family. This was short lived, as in 1976 the unit joined Vancouver Thunderbird Security Unit.

Yet again, in 1979 the Cadet Corps found its affiliation being changed. 2381 became affiliated with the Irish Fusiliers of Canada, following the two previous Cadet Corps to hold this honour. Effective on the 1st of January 1981 the sponsorship was shared with the Vancouver T.B. (Pacific No. 44) Branch, The Royal Canadian Legion.
On 25 June 2002, The British Columbia Regiment (Duke of Connaught’s Own) was officially amalgamated with the Irish Fusilier of Canada from the supplementary Order of Battle to form a new Regiment known as The British Columbia Regiment (Duke of Connaught’s Own). As such, the name of the Corps changed to 2381 BCR (Irish Fusiliers) RCACC. 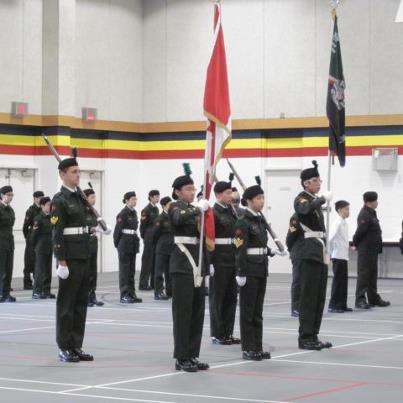