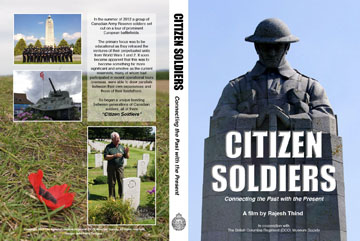 This acclaimed mini documentary, was inspired by the experiences of serving soldiers and Association members who participated in a Battlefield Tour of European battle sites where the Regiment had fought in World Wars 1 and 2. The excitement of seeing the actual battle sites, so familiar in written accounts and in photographs, was tempered by the raw emotions experienced when distinct parallels were drawn between the experiences of those “Dukes” who had fought so long ago and those who had experienced the cold hand of conflict in recent overseas deployments to Bosnia and Afghanistan.

The inspiration for the new Regimental branding was the cap badge of the 7th (1st British Columbia) Battalion of the Canadian Expeditionary Force which the current Regiment proudly perpetuates. The new branding was seen as a device to link the past with the present in a refreshing and highly adaptable graphic. This new branding has appeared on signage and displays and has been adapted for use on higher end items such as cufflinks, business card holders, pens, glassware and coasters, to name but a few. It has also been applied to Regimental golf shirts, hockey jerseys and hats. The full range of items available with the new branding are on display in the BCR Kit Shop.

The Regimental web site is the hub for all members of the Regimental Family. On display here is information regarding the various aspects of the serving Regiment, as well as news.