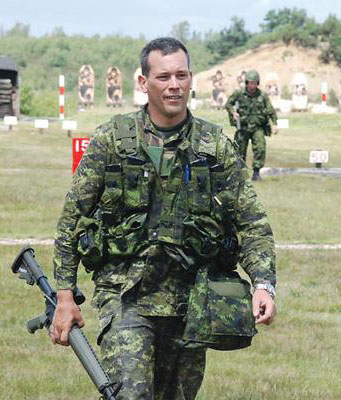 Marksmanship is a skill set which has characterized the Regiment since its inception. The BCR (DCO) Marksmanship Team proudly follow  in the footsteps of other Dukes, taking their places alongside RSM (then Rifleman) Sam J. Perry, Lt Col Edward Prior. Lt Col Hart-McHarg, Captain J. Duff Stuart, Corporals Paul Gibault, William Lightburn, and numerous others, who were all superb marksmen participating at Bisley from 1890 to present.

As recently as 2010, Dukes have represented the Regiment as members of the Canadian Army Combat Shooting Team participating in the Central Skill at Arms (CENTSAM) an international shooting competition at Bisley, Great Britain. The shoot is comprised of numerous matches shot over almost a month, and associated with three British skill-at-arms organizations; The National Rifle Association (NRA), The Army Rifle Association (ARA) and The Territorial Army (TA).

Teams from the British Army, Regular and Territorial, Canadian Army, New Zealand Army, Falkland Islands Defense Force and the Sultan of Oman’s Armed Forces made up the 400 or so competitors. The NRA and ARA Matches are fired concurrently with competitors dressed in full body armour and plates, helmets and tactical vests weighing approximately 50 lbs. Matches were fired regardless of the temperature that exceeded a humid 30 degrees Celsius throughout the entire shoot. Most of the shooting is done from sitting, kneeling, and standing positions, usually requiring the shooters to either sprint short distances, run longer distances and/or carry dummies weighing up to 175lbs, then shoot at small targets only exposed for short periods of time.

Cpl Ryan Steacy  won the prestigious Queen Mary Match, receiving the plate and chalice trophies along with a gold medal in recognition of his outstanding individual shooting performance. For Corporal Steacy winning one of the top honours was no small feat, but it’s what the North Vancouver soldier trained for from his youth to Bisley 2010.

The trophy is the twin of the one given at the Wimbledon tennis championship and is reported to be insured at about four and half million pounds – but unfortunately he doesn’t get to keep it.

The TA Matches, which the Canadian team shot this year for the first time, were used as a warm-up for the NRA and ARA Matches. Regardless, MCpl. Roder and Cpl. Steacy won three gold, three silver and one bronze medals. Cpl. Steacy was also top scorer on a gold medal team in the Brinsmead Match, a snap shooting match with quick 3 second exposures. The team was awarded a massive shield and gold medals. The team was pleased to have beaten the rival Omani Team. The Canadian Team also shot well in the Methuen Cup. Steacy and Roder obtained the highest scores and shot 3 out of the 4 possibles (50 out of possible 50 points) shot by team Canada in that match.

The Regiment is justifiably proud of its enduring tradition of marksmanship. 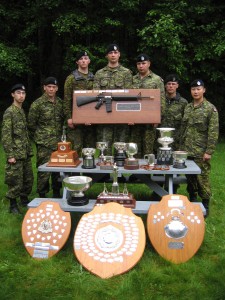 BC Service Rifle Competition, Chilliwack, BC