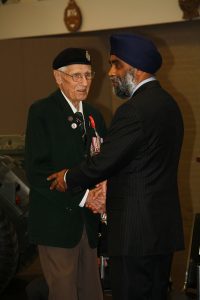 The Master of Ceremonies, Archie Steacy, welcomed the many guests in attendance and provided background information relating to th 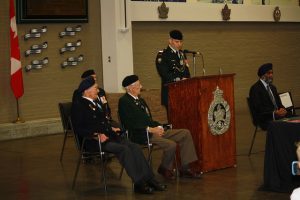 e Legion of Honour. Major Paul Lindsay, read the congratulatory letter received from the Consul General of France in Vancouver, Christophe Fleury. Particulars of each recipient’s service were recited by the MC and the Legion of Honour was presented to each recipient by the Minister. President “Recce Bob” Remple presented Certificates of Appreciation to Vern and Ted and thanked them for their service. The program continued with an excellent address in French by Clémence Hebbelnyck thanking our veterans for their service and sacrifice in the liberation of France (“her heroes”). Clémence’s father, one of our Regimental Association Field Agents in Europe, Gauthier Hebbelnyck provided the translation. Minister Sajjan addressed the many friends, family, Regimental and Regimental Association members with a memorable speech marking this very special occasion.

A reception followed in the WOs’ & Sgts’ Mess compliments of the Regimental Association, a co-host of this event with the Regiment.