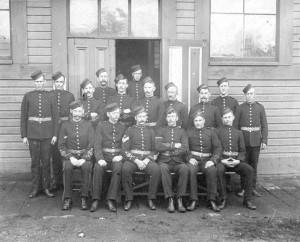 The 6th Battalion Rifles prior to departure for Boer War. A group photo to be known later as the “The Vancouver Seventeen” taken on Oct 29th 1889 in front of the old drill shed on Pender Street.

In 1899 war broke out between Britain and the two Boer Republics in South Africa. There was a strong demand from English Canada to send troops, and considerable opposition from French Canada towards any involvement at all. The Prime Minister, Wilfred Laurier, decided to compromise by sending a limited force of 1,000 volunteers for a term of service not to exceed twelve months. Twenty-four members of the Regiment became part of ‘A’ Company, 2nd (Special Service) Battalion, The Royal Canadian Regiment. The Regiment showed great distinction at the Battle of Paardeberg, which resulted in the ultimate surrender of Boer General Cronje and 4100 of his men. Other members of the Regiment served with The Lord Strathcona’s Horse.

The volunteers returned to Canada on 30th December, 1900, after having been inspected by Queen Victoria in England on their way home. Upon arrival in Vancouver they received a hero’s welcome. They had earned for their Regiment their first Battle Honour, which was not formally awarded until 1930. Many of these young men would go on to command battalions in the First World War.

A fourth member of the Regiment was killed in 1901 while serving with the South Africa Constabulary, which was formed to suppress the guerrilla war that dragged on after the formal surrender of the Boers. 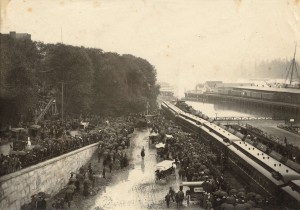 Crowds gather at the C.P.R. station for departure of the BC detachment to the Boer War, October 1899 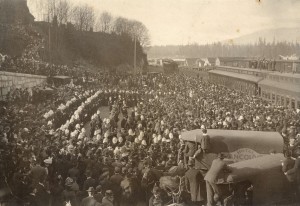