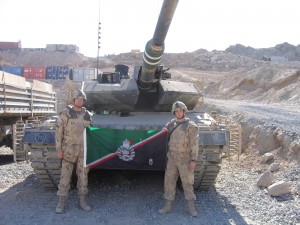 In the first decade of the 21st Century Canada was reminded that her army has a role in defending the interests of the Nation by the use of force if necessary. Canadian troops participated in the removal of the Taliban regime from Afghanistan in 2002 and took part in the establishment of the NATO International Security Assistance Force (IFOR) that brought stability to the country later that year. In 2006 the Canadian role in Afghanistan expanded significantly when a reinforced Canadian Battle Group was assigned to provide security in the southern Afghanistan province of Kandahar. Until the summer of 2011 Canada maintained a significant capability in the area, including a full Battle Group consisting of a battalion of infantry, a tank squadron, a reconnaissance squadron and supporting troops. Canada maintained a national support element at Kandhar Airfield and a large Provincial Reconstruction Team as well a an Operational Mentoring and Liaison Team with the Afghan National Army and Police Force. This force was deployed to disrupt and destroy insurgent and terrorist operations and provide a stable environment for the reconstruction of the province.

Soldiers from the British Columbia Regiment were amongst the first in Canada to volunteer as reinforcements to the Regular Force troops engaged in operations in Afghanistan. Close to one hundred BCR soldiers have served in Afghanistan in all elements of the Canadian task force in that troubled land. They were employed in a number of roles including tank crew members on the Leopard C2 tanks, security patrols, members of the reconstruction teams and as line infantrymen. Soldiers from the Regiment have continued to volunteer for operations in Afghanistan and have made a significant contribution to every rotation sent from western Canada.

The British Columbia Regiment (Duke of Connaught’s Own) is proud of its glorious past and looks forward optimistically to its future as a proud Regiment in Canada’s Army. Whatever the future may hold and whenever Canada need soldiers to defend its territory or its vital national interests, the Dukes are bound to be at the front.