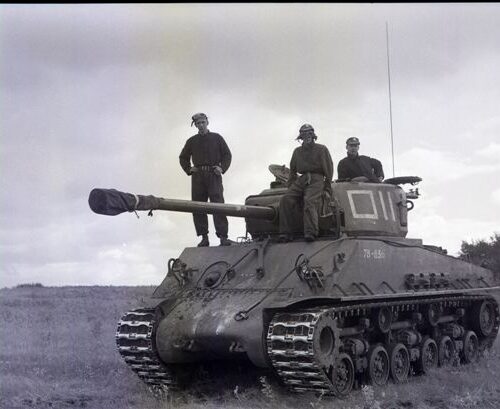 The Regiment was called out on active service during the disastrous Fraser Valley floods, and they were assigned a large area of responsibility near Langley. Much effort was put into trying to save the dykes at Barnston Island, and in rescuing farmers and their livestock after the dykes collapsed. All tasks were handled with dispatch and efficiency.

1948 also saw an effort by the Federal Government to take over the Drill Hall to be used for the National Employment Service and the Unemployment Insurance Commission. With the support of the newspapers and a good number of friends of the Regiment, led by Major-General FF Worthington, the take over was defeated.

The Korean War started in 1950, and although Canada sent a brigade overseas, the Regiment did not serve as a fighting unit. Volunteers from the Regiment did, however, serve with the Regular Force Armoured units which were sent, including the Royal Canadian Dragoons and the Lord Strathcona’s Horse (Royal Canadians).

The strength of the Regiment in the mid 1950’s was approximately 200 all ranks, with Squadrons in Vancouver and Nanaimo. Training was conducted on Sherman Tanks and at annual camps. Recruitment was enhanced by good attendance at summer camp and the winning of several Area competitions, including the Wallace Trophy for the most efficient regiment in 24 Militia Group in 1954, 1955, and 1956.

On the 19th May, 1958, the Regiment was designated The British Columbia Regiment (Duke of Connaught’s Own) (RCAC). Two years later, the Regiment was granted its first Guidon. The Guidon was presented by the Governor-General of Canada, Major-General Georges Vanier, during an impressive ceremony in the plaza in front of the Queen Elizabeth Theatre on Sunday, May 22nd, 1960.

In 1964 the Canadian Militia was reorganized and reduced in strength. Major units, such as the BCR, were permitted an establishment of 300 all ranks, and minor units were reduced to 100. On 28 February 1965, the Regiment’s role was changed once again, to that of an Armoured Reconnaissance Regiment; within a few years all of the Sherman tanks had been replaced with wheeled reconnaissance vehicles.

The Regiment’s Centennial Project was Exercise Gold Rush in 1967. The Regiment took a difficult route through the mountains from Seton Portage over Pavilion Mountain and went through the Caribou and Chilcotin before returning to Vancouver. The trip of a lifetime was marred by the tragic death of Trooper RT Wallis who perished when his vehicle overturned on wet pavement on the trip home.

Training courses also became more adventurous and took recruits farther afield than ever before. For Exercise Pegasus, Troopers from the British Columbia Regiment were attached to the Regular Force for three months in Germany. Unit members found their way onto parachute courses and more than one BCR qualified for “Jump” Wings. One BCR Officer, Lieutenant PM Randall, jumped with the Regular Force Parachute Team, “The Skyhawks”, during a four-year posting from 1982 to 1986.

During the 1970s and early 1980s many of our soldiers became qualified drivers on the Lynx Light Armoured Reconnaissance Vehicle. Every Summer, the Regiment received two troops of these vehicles on loan from the LDSH(RC) for our annual Militia Concentration camps. In 1970 the Regiment won both the Dunwoody and the Worthington Trophies as the best armoured reserve Regiment in western Canada and for the whole country respectively.

With the Change of Command Parade in October 1973, the Regiment wore, for the first time, the Canadian Forces Green uniform. Pips and crowns were replaced by gold bars and regimental identification was markedly absent. The loss of traditional accoutrements was keenly felt by many members. However, before too long, a measure of regimental identity was restored.

In 1974 the Regiment fostered a strong training relationship with the US Cavalry and the Washington State National Guard at Fort Lewis, Washington. Soldiers from the Regiment trained on M60 tanks and in M113 Amoured Personnel Carriers. The generous hospitality of the American was returned by inviting them to attend Winter Warfare exercises and Watermanship courses at Cultus Lake, BC.

To celebrate the Regiment’s 100th anniversary of service in 1983, the British Columbia Regiment was granted the Freedom of The City of Vancouver at a ceremony at City Hall, and marched back across the Connaught Bridge to the Drill Hall. The Centennial Year was also marked by the winning in 1984 of the coveted Worthington Trophy for being the best Army Reserve Armoured Regiment in Canada, which was won again in 1985. The Regimental Association conducted a tour of the Worthington Force battlefield and restored the Regimental monument, laying a new memorial plaque.