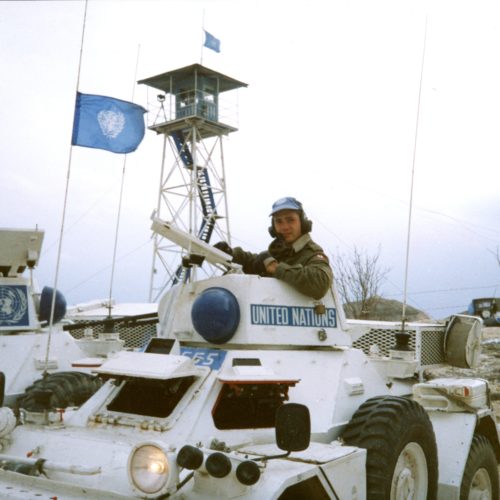 Peacekeeping and service after the Cold War

As peacekeeping missions became more common, so too did opportunities for overseas service. In 1985 an entire troop, under command of Second Lieutenant Bruce Kadonoff (later to command the Regiment) served with the Lord Strathcona’s Horse in Cyprus. A second troop served a year later with the Royal Canadian Dragoons. Cyprus was only one of several overseas missions for which the soldiers of the Regiment volunteered. Since 1974 close to 100 Dukes have served on United Nations, NATO or European Union missions in Cyprus, Kashmir, Vietnam, the Sudan, Bosnia-Herzegovina, the Golan Heights, Uganda, Central Africa, Egypt, Croatia, Lebanon, Syria and Afghanistan. Participants gained valuable experience and cherished memories.

In May 1994 the British Columbia Regiment (Duke of Connaught’s Own) received approval to enter into an official affiliation with HMCS Vancouver. This bond of friendship recognized the close ties that exist between the two units and the historical relationship they both share with the City of Vancouver. It was the first time in Canadian history that an Army unit and a Navy unit joined together in an official affiliation of this nature.

In 2005, a sizable contingent of Dukes traveled to the Netherlands to participate in the 60th anniversary of the liberation of Holland and the end of the Second World War. Members of the Regiment marched in a parade through the streets of Apeldoorn on 8 May, marking victory in Europe. Between the members of the Regiment, the Regimental band and the veterans and Association member, the BCR had more representatives on parade than any other unit from Canada. Dutch, young and old, celebrated with the soldiers and thanked the veterans.

In August 2006, a team of climbers was put together by Sergeant Ron Leblanc to participate in Exercise Summit Duke: the climbing of Mount Hart-McHarg and Mount Worthington. The two summits are named after the commanding officer of the 7th (1st BC) Battalion, Canadian Expeditionary Force and the commanding officer of the 28th Armoured Regiment (British Columbia Regiment), both killed in action. The lofty peaks are located near Peter Lougheed Provincial Park, in the Canadian Rockies. Commemorative bronze plaques were placed on a large boulder facing the peaks and two cairns were built on the summits by the climbers. Additionally, two Inuksuit, representing strength, leadership and motivation were built on the mountains. A short ceremony was held to pay tribute to the fallen leaders was brought to a solemn conclusion with the reading of short prayer written by Captain Paul Beckingham, the Regiment’s Padre.

In the Summer of 2008, Corporal Ryan Steacy participated in the world famous Bisley Rifle Competition, the first Duke to do so since 1938. As fate would have it, he was housed in the same room as Rifleman Sam Perry, a fellow Duke, and the first Canadian-born soldier to win the top prize at Bisley, in 1904.

The year 2008 also marked the British Columbia Regiment’s 125th Anniversary. The Freedom of the City of Vancouver was re-affirmed in a parade that saw 146 soldiers of the Regiment march with bayonets fixed and Guidon flying. After calling the Regiment to a halt, the Chief Constable of Vancouver Police escorted the Commanding Officer to the front door of City Hall. The Mayor’s Proclamation was read and the Regiment was invited to parade. The Salute included a Roll Past and a feu de joie. The day was crowned by a regimental ball at the Drill Hall, historic home of the Regiment. Over 260 guests attended and enjoyed a memorable evening. In keeping with Regimental tradition, speeches were short and spoke to the past, present and future of the Regiment. Happy Birthday was duly sung at the stroke of midnight and the “Cake Party”, led by Sergeant Huff Mullick, marched in the cake. When the last guests left in the early morning of October 13, 2008, the Regiment was 125 years old.