Founding of the Regiment

Home > History > Founding of the Regiment 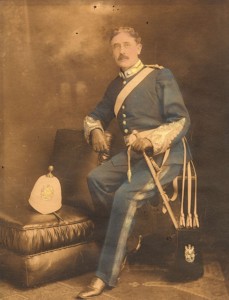 The Founding of the British Columbia Regiment

On 12 October 1883 the British Columbia Provisional Regiment of Garrison Artillery was formed by amalgamating all but one of the existing British Columbia militia companies into a single unit. As the senior company the New Westminster battery succeeded the Seymour Battery and, as the senior of the predecessor companies, was granted the honour of being designated Number 1 Battery, with the remaining batteries located in Victoria alongside the new Regiment’s headquarters. The British Columbia Regiment traces its formal history to this amalgamation of independent companies. The authorized strength of the new Regiment was about 200 all ranks, and its first band was authorized on 9 November 1883. By April 1884 the Regiment was ready for its annual Inspection, and later that year members attended at the Victoria School of Artillery. 64 pounder guns were provided by the Royal Navy for Training.

A Rising was reported amongst the Skeena Indians near Hazelton in the summer of l888, and the Premier and two of the members of the Cabinet in their capacities of Justices of the Peace called out the Militia for active service. “C” Battery from Victoria was embarked on the warship HMS Caroline which sailed 800 miles north and four days later arrived at the mouth of the Skeena River. Two days later, when they reached the offending village, all was quiet. The men remained encamped for another month having an interesting holiday in the wilderness exploring the surrounding area.

In 1886 the City of Vancouver was incorporated just before it was burnt to the ground by a brush fire that raged out of control. The city was rebuilt and promptly went into such a period of growth that by 1892 it was a city of some importance. Accommodations were acquired at the Imperial Opera House on Pender Street at the North end of Beatty Street (now the site of the Duncan Building and commemorated by a plaque just inside the main entrance). A rifle range was also cleared at Central Park at the expense of the city.

In July 1899 Major Worsnop, who had recently succeeded Townley as commanding officer of the 2nd Battalion in Vancouver, received orders to convert to infantry; Major Worsnop requested that the unit be designated a rifle regiment. The request was duly approved by Ottawa and the unit was designated the 6th Battalion Rifles. The official date was set for 1 August 1899 and the reorganization was declared complete on New Year’s Day, 1900. The 6th Rifles was organized with 2 companies based in New Westminster and 4 companies in Vancouver, co-located with Regimental Headquarters.