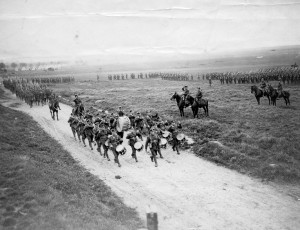 At the outbreak of the First World War the Canadian Minister of Militia decided to mobilize Canada’s main war effort by raising numbered battalions rather than employ the existing Militia Regiments intact. As a part of the Imperial war effort the Dominion of Canada initially offered a division as an expeditionary force; that force grew to four divisions under the Canadian Corps over the course of the war.

Seventeen infantry battalions were raised in British Columbia to serve overseas in the Great War and seven of those are perpetuated by the Regiment today. Three of the Regiment’s battalions became part of the order of battle of the Canadian Corps, while the remainder were broken up as reinforcements. Those forming part of the Corps included the 7th, 29th and 102nd Battalions.

The 7th Battalion was raised at Camp Valcartier, Quebec, in September 1914 with an initial strength of 1223 officers and men. Its first CO was Lieutenant-Colonel Hart-McHarg of the DCORs. The 7th was composed of drafts raised by five BC militia units. The 6th DCOR contributed 353 volunteers; the remainder came from other Regiments around the province. More than 6000 men served in the 7th Battalion which suffered 1440 killed and 3294 wounded during its 45 months on the Western Front. Members of the Battalion earned over 270 awards for gallantry, including three Victoria Crosses, the highest award for valour in the Empire. The VCs were earned by Captain Edward Donald Bellew and Privates Michael James O’Rourke and Walter Leigh Rayfield.

The 7th Battalion’s first major action was at Ypres at the Battle of Saint Julien. The Regiment was in brigade reserve on 22 April 1915 when poison chlorine gas was unleashed on the French Colonial Division to the left and north of the Canadian positions near Ypres. As the gas spread many French Colonial troops were seen running in all directions, throwing their weapons away and falling as they ran. The 7th Battalion was fallen in, less Number 1 Company which was left with the 8th Battalion in reserve, and they marched up the Grafenstafel Ridge where they remained until midnight occupying support trenches. At midnight they were moved to a new position in the hollow ground North of Saint Julian at Keerselaere. They began to dig in at the foot of a ridge, occupying old artillery dugouts and along a hedge line. On 23 April Colonel Hart-McHarg was mortally wounded while conducting a reconnaissance forward of the trenches, and command fell to Major Victor Odlum. The fighting for Saint Julien was fierce and the Battalion barely managed to escape capture when it was surrounded by the Germans. Lt Bellew won the Regiment’s first Victoria Cross for his efforts with Sergeant Pearless and the Machine Gun section, who stayed behind to try to hold off the Germans long enough for the Battalion to withdraw. Of the twenty-four officers and 900 men who went into battle, only six officers and 325 men mustered for roll call on 25 April when they were moved to the rear. The men in Number 1 Company and the 8th Battalion had been ordered out to the left to help fill the gap left by the French. They were able to hold out until 26 April in the face of gas and without support on either flank. Twenty-two out of a hundred returned to the battalion.

However, the 1st Canadian Division, including the 7th Battalion held the line and defeated the most determined attack by the Germans to that point in the war. It was the start of the enviable reputation that the Canadian troops would build throughout the war.

The 29th (Vancouver) Battalion, also known as “Tobin’s Tigers”, was raised in Vancouver in March of 1915 and had an initial strength of 1227 officers and men. Its first CO was Lieutenant-Colonel Henry Tobin, a veteran of the RCMP and the South African War. Arriving at the front in the fall of 1915 it served with distinction from the trenches of the Kemmel Sector to the Final 100 Days campaign. Of 4524 soldiers who served in its ranks during the war 606 were killed and 1400 were wounded in battle. More than 355 decorations for gallantry were earned by the men of the 29th, amongst them one Victoria Cross awarded to Company Sergeant-Major Robert Hill Hanna.

The 102nd (North British Columbia) Battalion, raised at Comox in December 1915, had an initial strength of 1005 officers and men. The Battalion was known as “Warden’s Warriors” after its first CO, Lieutenant-Colonel Warden. Warden had served in the DCORs and enlisted in the 7th Battalion. Wounded at 2nd Ypres he returned to Canada, was promoted to Lieutenant-Colonel, and raised the 102nd Battalion from volunteers in northern British Columbia. Arriving in France on 12 August 1916 the Battalion received its “baptism of fire” on the Somme. The 102nd served with distinction and great sacrifice throughout the remainder of the war, notably during the Final 100 Days campaign. Of the 3863 officers and men who served in the Battalion 676 gave their lives and 1715 were wounded. The soldiers of the Battalion earned 287 decorations for gallantry; amongst them was a Victoria Cross awarded to Lieutenant Graham Thompson Lyall.

The Regiments battalions in the CEF took part in every major engagement fought by the Canadian Corps in the war. All three attacked at Vimy Ridge in April 1917, and all three played a major role in the Final 100 Days campaign the ultimately defeated the German Army in the autumn of 1918.

With the defeat of the German Empire, two of the Regiment’s battalions, the 7th and 29th, formed part of the Occupation Force on the Rhine river. They returned to base camps in Belgium in early 1919. The battalions returned home in the ensuing months and were demobilized and dismissed with appropriate ceremony and fanfare.