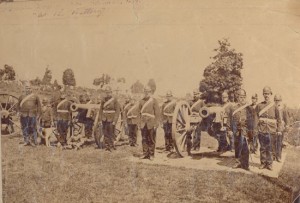 The Seymour Battery of Garrison Artillery at “The Battery” southeast of Albert Crescent in New Westminster. This photo was taken between 1878, when the men acquired spiked helmets, and 1886 when the helmets were replaced by busbies.

There have been soldiers on the southwest coast of what is now British Columbia since time immemorial. The First Nation residing in the area, the Salish, used citizen soldiers raised from the general male population to form self-defence forces and raiding parties to gain resources or undertake retaliatory operations against invaders. These Salish marine light infantry rarely raided amongst themselves. However, conflict with the Kwakiutl from the northern part of Vancouver Island and the adjacent mainland area was long standing. The last major raid in this conflict took place around 1860 when a force made up of Salish soldiers from the Cowichan, Saanich and Songish areas annihilated a Kwakiutl war party at Maple Bay near Duncan. The party then travelled north in their enemies’ canoes and destroyed the Kwakiutl village from which the raiders had set out.

The first Europeans to arrive in the area were ocean going explorers followed shortly thereafter by the first fur traders, who sought sea otter pelts for trade with China. Explorers and fur traders soon arrived by land and established a number of trading posts on the coast and in the interior of what would become British Columbia. In 1843, at the height of the dispute between the British and Americans over ownership of the Oregon Territory (between California and Alaska), the Governors of the Hudson’s Bay Company established Fort Camosun on the southwest part of Vancouver Island. Three years later the name of the fort was changed to Fort Victoria.

In 1849 Vancouver Island became a Crown colony and tensions continued between Britain and the United States in the Pacific Northwest; a dispute over the San Juan Islands in 1849 came close to hostilities. With the outbreak of the US Civil War suspicions increased on both sides. In early 1861 the Governor of the Colony accepted an offer from a prominent black merchant, Mr Mifflin Gibbs, to raise a militia company. In July of that year fifty black soldiers were sworn in and formed the Victoria Pioneer Rifle Company, known informally as the Africa Rifles. The Company met with wide-spread prejudices and a lack of resources; by 1863 they were essentially inactive. In 1864 this Volunteer Rifle Corps was reformed with two full rifle companies from the general European population and continued to flourish.

With the outbreak of the Fraser Valley Gold Rush in 1858, the crown colony of British Columbia was established on the mainland. The British dispatched a detachment of approximately 165 Royal Engineers, under the command of Colonel Richard Clement Moody, to the colony to help develop infrastructure and provide a foundation for the establishment of defence forces. These men later formed the nucleus of the volunteer soldiers who formed the first local militia unit on the mainland. In November 1863 the New Westminster Volunteer Rifles were formed with a strength of seventy three all ranks.

Enthusiasm for local defence got a boost in 1866 with the Fenian scare. The Fenians were Irish Americans who, after the American Civil War, were determined to invade and conquer Canada and use the occupation to negotiate the independence of Ireland from Britain. Several skirmishes took place in the Niagara peninsula, where battles were fought between the Fenians and the British Regulars reinforced by Canadian Militia. A force of Fenians arrived in San Francisco soon after the US Civil War ended and tried to hire a boat to sail north to the British colony on the Pacific. They were unsuccessful.

In response to the Fenian threat the Seymour Artillery Company was formed at New Westminster on 16 July 1866. Many members were former Royal Engineers. The War Office provided guns, rifles, ammunition and accoutrements for this unit, and a Drill Shed was built for them in New Westminster at the cost of $1400. The Russo-Turkish War in 1878 had some far-reaching effects that extended as far as the Pacific Ocean. The British Fleet had sailed through the Dardanelles into the Black Sea and threatened war against Russia. The Russians had retaliated by sending a formidable Squadron to the Pacific coast and threatened to attack the Coastal towns of British Columbia. The Russians used San Francisco as their base, and one memorable incident occurred when a Russian cruiser appeared off Esquimalt on a “friendly” visit. With only one small British gunboat present, the Russians could easily have destroyed the British vessel, burned the dockyard and shelled Victoria. In light of the vulnerabilities exposed in this incident, the Admiralty provided spare guns for the protection of the harbours in the area and several defensive batteries were constructed and manned by British Artillerymen.

This led eventually to the construction of Fort Rodd Hill, which protected Esquimault until the 1950’s. Although, the crisis passed without war, the need of a permanent unit to care for and man the guns was recognized. The Admiral in command of the Pacific Station asked for 100 men of the Royal Marine Artillery, but it was decided that the responsibility would fall to the Dominion of Canada. The result was the creation of our Regiment out of the existing volunteer units into three batteries in Victoria and one in New Westminster.