Duke of Connaught’s Own Rifles 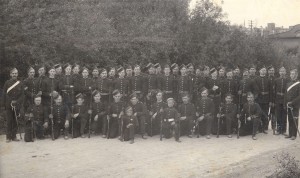 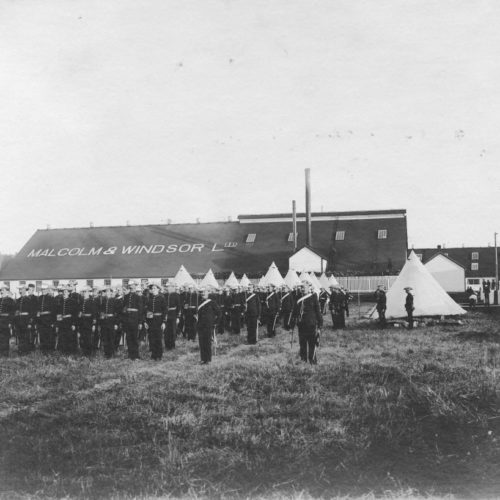 6th Regiment, The Duke of Connaught’s Own Rifles in camp during the Steveston riots, July 1900 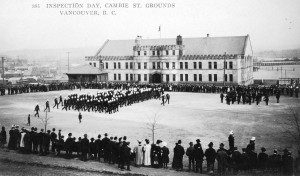 The 6th Regiment (DCOR) on parade at Cambie Street grounds, 1909 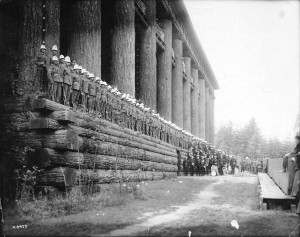 6th Duke of Connaught’s Own Rifles

Back in the Regiment in Vancouver, the change to rifles from artillery brought new uniforms, traditions and affiliations. On 1st May 1900 the Regiment was formally designated Sixth Regiment (Duke of Connaught’s Own Rifles) (6th DCOR) and the Regiment became formally affiliated with the Rifle Brigade, whose heritage of green uniforms, expert marksmanship and distinctive parade drill was inherited by the 6th DCOR.

The Steveston riots in July 1900 provided the Regiment with its second call to arms in Aid of the Civil Power. At the time of the incident, Steveston was probably the world’s largest salmon fishing centre. The European and Native fishermen had gone on strike, while the Japanese fisherman decided to keep on selling to the cannery. Though there had been no violence, the Reeve, with two justices of the peace, read the Riot Act to the strikers. When they did not disperse, he took the step of requesting military protection. At 11:45 PM Colonel Worsnop received his orders. As only one in five home had a telephone at that time, Buglers rode around Vancouver calling assembly from trolley cars. Within a short time, four companies were assembled and boarded the CPR Steamer Comox bound for Steveston. Ten rounds of ball cartridge were issued to each soldier with another twenty held in reserve. The men were told that in the event of action being called of them that they were to shoot to kill. Fortunately, the strikers got word of the army being on their way, and the Regiment disembarked to a quiet town. They set up camp nearby and enjoyed the weather for a couple of weeks until things settled.

In the meantime the new Drill Hall continued to rise at 620 Beatty Street, with its castle like turrets built of brick and stone. The Drill Hall, which continues to be the home of the Regiment, was formally opened on the 30 September 1901 by HRH The Duke of Cornwall and York, who later became King George V. Two commemorative chairs built especially for the Duke and Duchess; they reside in the Regiment’s Museum today.

In 1904 a private of the DCOR, Sam Perry, became the top rifle shot of the entire Empire, winning the King’s Prize at Bisley – he was the first native born Canadian to attain that honour. At 600 yards he scored 18 Bull’s-eyes and two inners and at 1,000 yards he scored forty-eight out of fifty.

This was the start of an amazing record of shooting proficiency which saw the Regiment win the Gordon Highlander’s Musketry Trophy, and two Captains, WH Forrest and J Duff Stuart both shot on the Canadian team which won the Kolapore Cup. Many other trophies and cups were won by Regimental shooting teams over the years.

In 1907 permission was granted to organize a Maxim Gun School. Lieutenant JS Matthews, who later became city archivist, was put in charge of the school, which was the first of its kind in British Columbia. His pupils formed the machine-gun section of the 7th (1st British Columbia) Battalion of the Canadian Expeditionary Force in 1914.

Another interesting incident in the Drill Hall occurred on 16 March 1908, when a gala event was staged to recreate the Battle of Paardeberg. The “British” troops were formed out of the South African veterans and the “Boers” out of the other soldiers of the Regiment. Stands were built within the Drill Hall to accommodate the guests. Through the north doors streamed the Boers towing wagons which they quickly formed Into a Laager. Then in rushed the British to storm the Boer position. Rifles blazed. The cries of the wounded British were remarkably lifelike. “My God! I’ve been shot!” The 18th Field Ambulance, who were taking part in the pageant, found real blood coming from the wounded, one of whom had been shot through the shoulder. The Regimental Medical Officer, Captain McTavish, and his stretcher bearers looked after the “fake” wounded. Apparently an ever-eager young “Boer” managed to find an extra supply of ammunition and had secretly distributed it. He had procured real bullets by mistake and they had been shot around the Drill Hall. Fortunately, no one died and there was no formal inquiry. Major Hart-McHarg, who had organized the event, must have been relieved. The local press, who were present for the gala, kept sensibly quiet about the affair.
British Columbia in general, and Vancouver in particular, underwent a rapid increase in population in the first decade of the 20th Century. That increase in population brought with it a general demand for additional Militia units. In 1910 the 104th Westminster Fusiliers were formed in New Westminster from the companies of the 6th DCOR located in that city, and the 72nd Highlanders, later known as the Seaforth Highlanders of Canada, were established in Vancouver.

In September 1912, HRH the Duke of Connaught, Governor-General of Canada, visited Vancouver. On 12th September, 1912, HRH the Duchess officially renamed the Cambie Bridge in honour of the Duke, as The Connaught Bridge.

In 1913 a third infantry regiment was authorized for Vancouver and on 15 August of that year Lieutenant-Colonel George McSpadden raised the 11th Irish Fusiliers of Canada.

In 1913 came another call to arms in Aid of the Civil Authority. The call out for the Nanaimo Coal strike was the longest in the Regiment’s history. When Chinese and Japanese strikebreakers were brought into the Nanaimo coal mines, one thousand striking miners went on a rampage. They took possession of the town, looting, burning, fighting and destroying property. Many innocent families, including women and children, took to the woods for their safety.

The Premier, Sir Richard McBride was away, but WJ Bowser, the Attorney General and Acting Premier quickly called out the Militia. On the evening of 13 May 1913, a thousand man force, including the 6th DCOR, sailed for Nanaimo and the strike was brought under control. Most of the troops returned home a month later, but a small guard was maintained for some time afterward.

The steamer Komagata Maru arrived in Vancouver harbour on 24 May 1914. On board were 378 Sikhs and their leader, Gurdit Singh, who hoped to immigrate to Canada. Although thirty-four people were allowed ashore as “returning immigrants”, the rest were refused entry as the number of Sikh immigrants to BC was restricted by orders-in-council. When ordered to leave they seized the ship and violently repelled police and immigration officers. On 23 July 1914 men from the 6th DCOR and the lrish Fusiliers stood by as HMCS Rainbow sailed into harbour, trained its guns on the Komagata Maru, and escorted it out of Vancouver Harbour, thus ending the incident.

As soon as the Regiment became affiliated with the Rifle Brigade a bugle band was formed. Light lnfantry and riflemen were directed in the field by bugle calls and whistles, rather than by drum rolls, as they were quite often well spread out over the battlefield. We were fortunate in having two capable bandmasters who turned the Bugle Band into a crack formation, Mr F. T. Hatfield ran the band from 1902 until 1907, and then Captain McManus took over in 1908. In 1909 they played at the Alaska-Yukon-Pacific Exposition, and they were so well received that they went on a tour and gave concerts in Bellingham, Seattle, Portland, and in towns of importance as far south as San Diego.