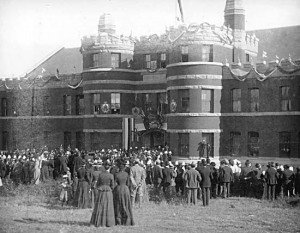 Opening of the Beatty Street Drill Hall in Vancouver, 1901, by the Duke and Duchess of Cornwall and York.

Standing on the corner of Beatty and Dunsmuir Streets on the eastern edge of downtown Vancouver stands a stately building from the beginning of the 20th Century. The Drill Hall, a fine sample of classic military from the Edwardian age, is home to the oldest and finest Regiment in British Columbia. The British Columbia Regiment (Duke of Connaught’s Own) is a reserve armoured reconnaissance regiment with a long and storied history dating back to the mid-19th Century.

The building was designed by architect David Ewart and opened on 30 September 1901 by the Duke of Cornwall (later King George V). With two large castle-like turrets complete with battlements, and two tanks and a 64-pounder Gun alongside the large white structure, Beatty Street Drill Hall has long been a Vancouver landmark and is listed as a class-A heritage building.

The walls are three and a half feet thick, and the building rests on huge granite blocks. Limestone from Gabriola Island was used for the parapet and it features a rusticated stone trim. The Drill Hall includes a parade square, offices, and store rooms. It formerly contained a firing range and bowling alley. Originally, the Cambie Street Grounds, now a parking lot across the street, was also used as part of the Regiment’s training facilities.

In the Canadian Forces, an armoury is a place where a reserve unit trains, meets, and parades. 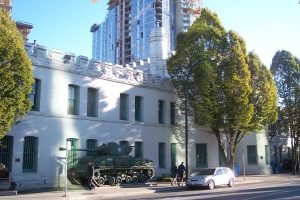 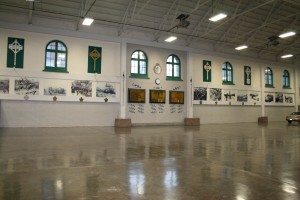 Inside the Drill Hall