Exercise Lynx Duke, The British Columbia Regiment’s last exercise of 2015 had them training in Joint Base Lewis-McChord (JBLM), Washington State. The men, spirited by an exciting training scenario, a continuation of exercise Ferret Duke. With a platoon from the Royal Westminster Regiment as opposition force and a clear weather forecast we were all highly motivated and eager for a weekend of hard constructive training.

The Wednesday exercise preparations went smoothly with all members working hard to ensure their vehicles and kit were as prepared as possible setting Recce Squadron up for success. The Friday evening had tight timings and I for one was impressed by how keen the troops were by how many came in early.

With the road move on Friday 20 November to the training area complete with no issues, Recce Squadron moved smoothly into a squadron hide greatly aided by rehearsals on the previous exercise. I knew that a good rest was much needed as the weekend promised to have a vigorous schedule with little let up.

The morning of the 21st proved to be an early start. The entire squadron, up long before the sun in a flurry of last minute preparations before stepping off. With cam paint on, ammo distributed and final orders given the troops moved into positions to secure their lines of departure(LD). 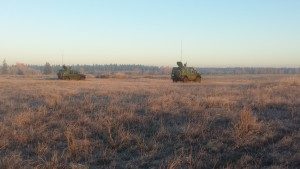 The area of operations (AO) was split into two boundaries, AO Hammer and Anvil. Both 41 and 42 took up positions in AO Hammer to conduct  zone and route recce’s and were ready for the expected training tempo to commence. H hour launched the squadron into the diverse training ground and it wasn’t long before contact reports and sit-reps were being sent up. The morning proved to be a steady pace allowing for after action reviews (AAR) to take place so patrols could quickly learn and reset while also maintaining momentum.

The afternoon had both troops moved to the south east AO , AO Anvil. With the training area at JBLM being diverse the new AO proved to be a change of scenery for both troops. 42 now on the western side of the AO conducting route recce’s in inclosed tight canalizing terrain and 41 on the eastern flank conducting an area recce the tempo increased with complex enemy contacts and held up drills.

Saturday night, after a resupply and a hot meal, we moved into troop hides to prepare for dismounted point recce’s. I led a four person recce detachment with a task of gaining information on the enemy and ground on an airfield in the north of the training area. The open terrain surrounding the airfield was illuminated by a bright moon in a cloudless night sky and thus had us moving with caution and purpose as we approached the objective. With my overwatch team in place I was able to cloverleaf the objective gaining eyes on enemy vehicles, enemy locations and buildings in the area. With tight timings and while we remained undetected I was satisfied with my point recce and decided to return to the troop hide armed with information to pass onto higher.

Sunday 22nd November had the exercise culminate in a demonstration and practice of patrol movement in an open area in order to solidify the training we had accomplished while in Fort Lewis. The long road move back to the regiment has some minor set-backs but were quickly dealt with by the regiments classic professionalism and expediency.

Exercise Lynx Duke provided me the opportunity to develop my patrol movement, navigation, voice procedure, react to contacts, coordinating activities and SOP’s in the patrol context. With perfect clear crisp winter weather, Mount Rainier canvasing the horizon and a diverse training environment, exciting scenario with an enemy force I can safely say it was a highly successful training exercise in which everyone involved learned something new, further developed their existing soldering skills and had fun.

As always I’m left looking forward to what challenges lay ahead and what opportunities the next exercise will bring.