As we rolled in to October we started to look forward to the first Recce Exercise, Exercise Ferret Duke. The anticipation was high, with many newly qualified Troopers, Crew Commanders and both the Troop Leaders coming fresh off their course. To meet the Commanding Officer’s intent, the focus was on Crew level skills and the Crew Commanders. Everyone was excited to work with their crews for the first time and carry out the tasks of Recce Soldiers. Once all kit and weapons were signed for and handed out, the Squadron departed the Drill Hall. Once all the Troops consolidated and gathered at the entrance of the Opsee Training area, it was game face on. Troops prepared to go tactical by applying camouflage paint, black out lights and Guns up.

As Troops get prepared to go tactical, the Troop Leaders depart to receive the harbour orders from the Sergeant Major. The occupation of the squadron harbour could have been much better, but for the first time as a Squadron, it was not too bad. There were minor issues that needed to be fixed and basic Standard Operating Procedures (SOP). Once all the vehicles were in position, the troops carried on with the occupation of harbour and hide. Troop Leaders head to the Squadron Headquarters for orders and further direction from the OC, twenty minutes after, the command “Area appears clear” is given. Troops were ordered to go to ground as soon as their vehicle and kit were ready for the day tomorrow. 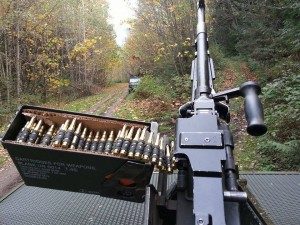 The squadron kicked off the day with a thorough lesson from the Sargent Major on the occupation of a Squadron harbour. The class was great, it answered a lot of the questions that troops had regarding the night before. We all were optimistic about the weather, because the skies started to clear and sun peaking out. The weekend exercises usually result in a wet and damp one. The troops disperse into their zones to carry on with the mounted tasks. Although the Opsee training area is small and hard to carry out mounted drills it was a great way to start off. The patrol commanders take their patrols, and practice held up drills, vehicle movements, and contact drills. For the Troop Leaders and Patrol commanders, it was a great way to learn about each other. Being a walk through talk through Exercise the squadron was able to get back into the recce mindset, brush off the skills for some who have been away, and for those who were on course, just get more practice.

After a full day of carrying out traditional recce tasks, the troops moved into Troop Hides. Troops were tested by only being given a limited time to occupy, once the occupations drills had started the troop leaders gathered with the OC to receive orders for night activities. The two troops were divided into two patrols in order to conduct two dismounted patrols for the night, for my troop one of the patrols ended up going up the mountain and was able to carry on with out being detected. Once the troops were all back safe we went to ground to prepare for another full day. 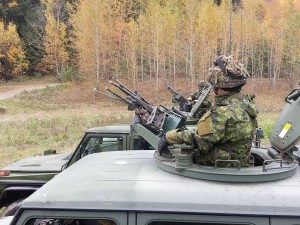 Sunday started with a bang with both troop hides being ambushed by our assault troop. The ambush was an unforeseen challenge and it required the troops actively apply the skills necessary. We all had areas to improve and were given that time to talk about it and have an in troop after actions review.

The next set of skills the troops practiced was reacting to contact scenarios. The contacts were placed strategically along the routes and created different tactical situations. The troops were able to identify different challenges, based on situations and react differently. One of the situations a patrol in two troop ran into was a road blocked by two dismounts with weapons but with no hostile intent. The patrol set up a successful fire base and was able to remove the road block and continue with trace without elevating the conflict.

The last skill the Squadron practiced was occupying a squadron harbour in a built up area. Using the skills learned on Friday and Saturday the troops occupied the harbour with minimal issues. This concluded the exercise and carried out a squadron level after action review. Once the clean up of the vehicles and the training area was complete the troops conducted a road move back to the Drill Hall for Post Ex drills.

Overall, the Exercise Ferret Duke was a success. The troops were able to practice a wide variety of skills from occupying hides and harbours to safely and aggressively reacting to contact. This was a great was to start off the year, and a stepping stone for future Recce Exercises to come in the year.